Many of us take our skin for granted. We allow our skin to dry out, put harmful chemicals on it and rarely safeguard it from sun damage. The skin is delicate and can be damaged so easily. Scar tissue is a common concern for many people. It is a natural component of the healing process which occurs after an injury such as a burn, cut, scrape, surgery, fungal infection, insect bite or acne. Scars form because the natural skin has been damaged beyond its first layer. The appearance of a scar depends on the location and size of the wound. However, other factors can determine the appearance of scars including a person’s age, sex, genes and ethnicity. There are several different types of scars and each one can present different appearances and be treated in different ways:

Keloid scars occur due to an overly aggressive healing process. This type of scar usually extends beyond the initial injury and can obstruct natural movement. Patients may be able to prevent keloids from forming by using pressure treatments, or gel pads with silicone, after an injury. Keloid scars are commonly seen among people of ethnicity.
• Small keloids can be treated using cryotherapy, or a freezing therapy, which uses liquid nitrogen.
• Larger or problematic keloids may require steroid injections, surgery or silicone sheets to flatten the scar.

Contracture scars usually occur when a person’s skin has been burned. This type of scar tightens the surrounding skin and can limit a person’s ability to move. Contracture scars can be skin deep or they may burrow deeper down and limit muscle function as well as the nerves. Patients who have been burned may need to wear a pressure garment to prevent or lessen the amount of contracture scars from forming.
• Range of motion exercises can keep the muscles and joints flexible. A physical therapist will instruct the patient on the types of exercises and how often to do them.
• Patients who have been severely burned on or near a joint may be fitted with a splint in order to keep the joint straight and to prevent contracture scars.

Hypertrophic scars are raised scars which appear red in color. They appear similar to keloids but they do not extend beyond the injury.
• Patients who suffer from hypertrophic scars can get steroid injections to reduce the inflammation and calm the redness down.
• Silicone sheets can also be used to treat these scars. 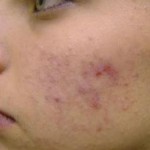 Acne scars are very prominent with anyone who has ever had severe acne. However, there are several types of acne scars which can range from deep pits to angular looking scars. Since there are so many variations of acne scars, the treatment options also vary.
• Soft tissue fillers can be used for indented scars to help plump them up.
• Laser resurfacing improves the skin’s appearance and enhances collagen production beneath the skin.
• Chemical peels or dermabrasion should only be used for severe scarring due to the fact that both of these procedures involve removing the top layer of skin. 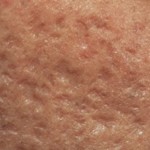 Atrophic Scars are also known as “ice-pick”, pitted or sunken scars. These scars are very prominent with anyone who has ever had severe acne. The pinpoint skin depression or holes occur due to the loss of tissue under the skin which becomes destroyed when rupturing an inflamed pimple. Atrophic scars can also be caused by chickenpox or an injury which includes the loss of underlying fat. The characteristics of these scars can vary from deep pits to minor wavelike or angular looking scars. Since there are so many variations with atrophic scars, the treatment options also vary.
• Indented scars may benefit from soft tissue fillers in order to plump them up
• Silicone sheeting can help to fill in ice pick scars
• Laser resurfacing can improve the skin’s appearance and/or stimulate collagen production beneath the surface of the skin
• Chemical peels or Dermabrasion both involve removing the top layer of skin to promote the regeneration of fresh skin and is an option for severe scarring