All surgeries leave some level of scarring and in general peopled don not like seeing scars on their bodies. Facial scars are often the most emotionally devastating. Than why do thousands of mean and women each year elect to undergo face lifts and other cosmetic procedures to keep a youthful appearance? What about the scarring. There are various ways in which surgeons hide and mitigate scarring. Mitigation of scarring in the surgery is critical for the success of the patient. 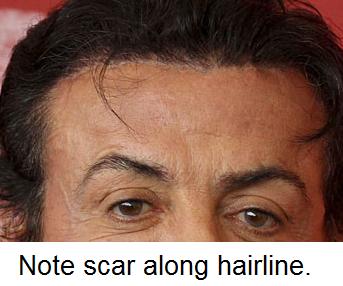 The nature of facial cosmetic surgery demands thorought research by a patient. Interviewing several surgeons who are experts in the particular procedure you need is important. Also understanding how they will mitigate the appearance of the surgical scars bears a thorough understanding by the patient. Reviewing untouched before and after photos of each doctor under ones consideration should be part of the process of finding a surgeon. There also surgeons who specialize in facial scar revision which reduces the appearance of the scar.

Why do scars have different colors?

New scars would always turn out to be red or purple in color as a result of damaged blood vessels and inflammation. These are hyperpigmented scars. Older scars are white in color. Resulting from the inflammation and damage to the blood vessels and cells loss of pigmentproducing,cells occur. The scar becomes hypopigmented (pale), because of the loss of skin pigment. The skin has a great capacity to regenerate itself. The scars are a sign of the skin attempting to heal itself. Normally when the skin is quickly repaired, the new skin may have a different appearance. This persistent in the formation of the scars that don’t fade away.

How long does it normally take for scars to fade to their final color?

Generally, major scars from either surgery or injury take about six to twelve months to fade to
their final color.

How good is scar revisioning?

Do some people have a predisposition to develop more prominent scars?

It believed that genetic factors play a role in the scarring process. Scarring may be more disfiguring for some people. There has been new treatment developed that can help scars fade
away.

Scars are a permanent mark that indicates the skin’s attempt to heal itself. When the skin is damaged the top layer occurs, cells to quickly multiply to form new cells to fill in the gap. When the wound is deeper into the underlying skin tissue, the cells that form collagen are stimulated and they fill in the gap by producing abundant fibrous connective tissue. If the density of this new tissue is relatively extensive it is usually replaced by normal skin layer over time. A result of a persistent scar remains, when the mass of new tissue is relatively extensive it is associated to cell damage and the fibrous tissue remains.

Burns caused by heat, chemicals and fires can result in the most traumatic types of scaring. The severity of burns is classified as first, second and third degree burn. This designation is based on the dept of damage to the outer and deeper layers of the epidermis (skin) and dermis (inner skin) tissue.

Burns can leave patients with severe physical disfigurements.
The emotional trauma can often exceed the physical trauma as self image is an integral part of an individual’s self esteem. Scar revision surgery for all types of scars is often elected to positively affect the patient’s emotional well being.

Burn treatments usually involve skin grafting and cosmetic reconstruction, and may be performed in an emergency facility or later on. These treatments also focus on restoring function to the burned skin to reduce the risk of complications such as loss of mobility or a loss of one of the senses.
Acute Burn Care

Any type of burn on the skin requires immediate medical attention to stabilize the patient, clean the wound and reduce the risk of complications such as infection, scarring, breathing problems and limited bone and joint mobility. Initial burn care focuses on assessing and treating the initial burn symptoms, prevents infections and other potential further risks. Additional treatment may be required at a later time for skin reconstruction. It is also important for patients to remain hydrated after a burn, so fluids may be administered intravenously to prevent dehydration.

Comprehensive burn care that includes an evaluation of:
• the burn and any related conditions
• thorough wound care
• proper dressing
• pain mitigation through medications
• emergency surgery as may be required.
Burn Scars

Most burns will usually leave a scar,The appearance of the scar depends on the size, location and severity of the burn. Scars usually become less noticeable over time, however when they scar is obvious patients seek reconstructive treatment to improve their appearance of scars that are physically unattractive or disfiguring. Reconstructive procedures are most often performed after the burn has fully healed, which may be nine months to a year after the original injury.

Scar reconstruction is usually performed through an outpatient surgical procedure that may involve skin and tissue grafts, skin flaps or injectable fillers to restore a more natural appearance, while also correcting any functional problems caused by the scar and improving the patient’s self-confidence as well.

A contracture is a complication of burn scarring that involves a tightening and thickening of the burn scar that in turn restricts movement of the affected area. It is important for patients to take precautions to prevent contractures from occurring, by exercising, wearing a splint and continuing to promote everyday activities that require movement.

The unpredictability of scars is a part of the human experience. Many scars are unobtrusive and we often forget about them. It is not uncommon especially among machismo male culture to embellish the history of a scar as a rite of passage. Unfortunately for many people a scar can be a debilitating phenomenon emotionally and physically. It is for these reasons that some insurance programs will cover scar revision for patients.

The formation of a scar depends as much upon the way your body heals. Likewise your individual healing process combined with the surgeon’s skill affects the success of a scar revision surgery outcome.

The factors that affect scarring are:
• the size and severity of the wound,
• its shape and direction
• the original color and thickness of your skin
• the blood supply to the injured area.

The merits as to the need for plastic surgery are a highly personal decision, and are different for each person.

Though many health insurance plans will not cover scar revision surgery for cosmetics alone. If the surgery if for complications related to the injury and the scar can be revised through the procedure it can be covered. Some policies also include coverage for scarring that is limiting body functionality. You must carefully review your health insurance policy.

It is impossible to remove a scar completely. However, plastic surgery can often do much to lessen the severity of a scar, making it less noticeable by applying or injecting steroids or through scar revision, a commonly used surgical procedure. Many people assume that as elective surgery it has to be an out of pocket expense. This is not necessarily true. Check with your medical insurance provider to see if this is the case; don’t assume. Many people improve their self image and quality of life through scar revision surgery.