The reaction to having a scar on the skin varies per person. Some have an initial reaction of shock followed by feelings of anxiety of what the scar will look like after it completely forms. Others have feelings about the scar that are related to the event such as anger and shame.

No matter what the reaction is from a person when it comes to a scar, patients want to find a way to lessen or eliminate the appearance of the scar. Let’s take a look at different types of scars and the best methods to treat them. 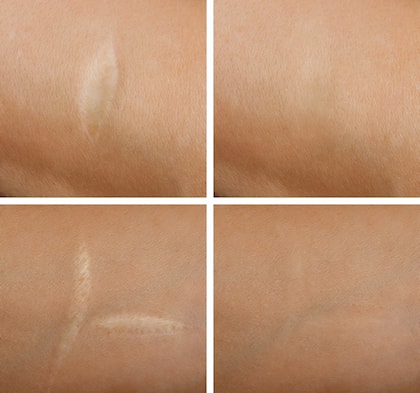 Types of Scars and Their Treatment

The condition known as post-inflammatory hyperpigmentation is a common side effect of acne and it can leave dark marks in patches or dots on the skin. The treatment options for this side effect can include products that are used topically to fade the dark patches such as hydroquinone that is prescribed by a board-certified doctor. Patients should also search for ingredients that suppress excess melanin pigment such as vitamin C, licorice extract, retinol, niacinamide and bakuchiol. In addition, the use of a broad-spectrum sunscreen on a daily basis helps to prevent the condition from getting any worse.

Don’t Pick at the Scars during Scar Treatment

When it comes to treating scars, it is important not to pick or squeeze a scar because the pressure can increase the inflammation and infection deep into the skin. This warning is also the same when it comes to picking at scabs because this can increase the chances of scarring. It takes time and patience to achieve the best results and patients need to relax and give the scar treatments listed above time to properly treat the scars.