Scars are part of life but they can be considered unsightly to most people. This is especially true when they happen to a celebrity figure. Celebrities are known to have the brightest smiles, flowing hair and flawless skin. Yet, a scar can change a person’s life and even the career of a person. However, scars can also be a reminder of survival from a trauma or surgery. One Beverly Hills reality TV star experienced a terrible ordeal and lived to tell about it. Not only that, she learned to embrace her life and the scar that came from that fateful night. 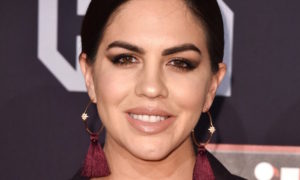 Shortly after Katie Maloney started working at Sexy Unique Restaurant (SUR) on Vanderpump Rules in November of 2009, she fell through a skylight during a party. The drop was nearly three stories as she smashed through a plate-glass window and toppled down a flight of stairs. Katie suffered cuts, bruises, a broken jaw, a broken collarbone and minor brain injury. It was a miracle that she survived this horrendous accident and was able to move on with her life. Her husband, Tom Schwartz, told Bravo TV that he celebrates her life every year on the anniversary of her accident.

Unfortunately, the eyes of the public and other celebrity figures are not always kind. Designer Kevin Lee, who is one of Lisa Vanderpump’s friends, verbally bashed Katie’s appearance on an episode of Vanderpump Rules. During the show, the group was at a magazine party and Kevin called out Katie’s weight. However, Katie’s castmates and friends had her back. Lisa Vanderpump referred to Katie as one of the most beautiful girls in the restaurant. That night, Lisa even tweeted words of encouragement to Katie. The tweet was followed by words of praise from friends and fans from all over the world.

The physical body does not always show the emotional trauma that some carry with them after an accident. Thankfully, some people are able to look past the changes to the body and accept the scars that life gives them. Katie feels that cheating death put everything into perspective for her. While she could go to a doctor and have scar revision surgery, she feels that the surgery would erase this monumental moment in her life. Katie has also stated that she likes her scar because it gives her character. She even considers it a badge of honor that shows she is still here.